Weather Station, Eureka. "I Have Found It" AKA "Garden Spot of the Arctic" 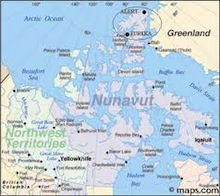 Eureka was the first Joint Arctic Weather Station (JAWS) established on April 7th. 1947. Flying in from Thule, Greenland the United States Air Force landed on frozen Slidre Fjord. Carrying a joint United States/Canadian crew of six men and supplies they arrived at 11:00am and by 7:00pm the first building, a Jamesway hut was erected and heated, radio equipment installed and hot meals available!

Using some equipment that had been airlifted in, the six men at the station along with carrying out their weather duties constructed a land based airstrip in July of that year.

In the following month of August an Icebreaker reached Eureka with two additional men for the station, lots of consumable supplies and additional equipment. Building material were also delivered on this trip so that more permanent buildings could be completed before the dark period and winter would set in.

On July 2nd. 1972 Eureka became a solely Canadian operation when the Americans withdrew from the station. 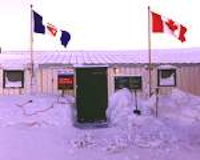 Geographically Eureka is situated at one of the most beautiful locations in the Arctic. Located on the Foshiem Peninsula, on the north shore of Slidre Fjord the surroundings are breathtaking.

Ellesmere Island is famous for some very majestic mountainous terrain, and just to the north of Eureka is Blacktop Ridge with peaks reaching up to 825 meters (2700+ feet). Also in the area is Cape Hare at 550 meters, Sawtooth Ridge with peaks up to 1200 meters. Axel Heiberg Island to the west is also visible most days. 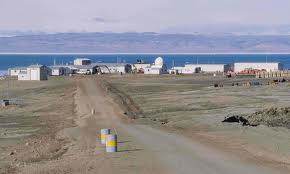 14 km west of Eureka you will find the ASTRO (Arctic Stratospheric Ozone Observatory) lab, this facility came into operation in 1993 as a world class ozone research centre operated by Environment Canada. The ASTRO centre hosted scientists from around the world until it was closed down due to financial constraints.

However in 2005 the station became operational again under PEARL (Polar Environment Atmospheric Research Laboratory). The lab now contains a wide array of instrument for measurement of atmospheric conditions form ground level to 100km and is a world class facility.

Eureka has a usual staff of around 10 to 12 people and is a very modern facility. The main operations building is two story with approximately 16,000 square feet of floor space which include: Office, recreation area, kitchen, dining room, pantry and TV room on the lower floor with 19 accommodation rooms on the second floor.

Eureka has grown over the years and today encompasses many buildings for the support and operation of this Arctic station. 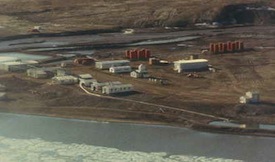 View of Eureka from above

Because of it's location and infrastructure Eureka is also used as a final staging point for North Pole expeditions.

Click on the link below for a visitors guide that provides a wealth of information on the station and the services it offers.

Do you have an adventure story to share from Eureka?

What's Your Favourite Adventure From Eureka?

Post up to four of your Eureka photos as well!