The Arctic Walrus, from a Danish word havalros meaning "sea cow" or "sea horse". In Inuit aivik in Yu'pik aivuk.

The Arctic region has it's fair share of fascinating wildlife, the walrus would definitely be in this category.

There are 3 distinct populations of walrus that live in the Arctic Sea. These 3 groups are marked by some slight variations in their anatomy.

The largest population by far live on the Pacific side, in and around the Bering Strait, the Chukchi Sea and the Beaufort Sea. The walrus in this area grow a little larger in size and also grow larger tusks that their cousins on the Atlantic side. The Pacific walrus are estimated to have a population of just over 200,000.

On the Atlantic side the population is much smaller, estimated at 20,000 animals. These walrus call Baffin Bay, Greenland, Svalbard and the western part of Northern Russia home. They are slightly smaller in size and have shorter tusks than the Pacific animals.

The third population are the Laptev Walrus, they make their home in parts of the Laptev, Kara and East Siberian Seas. Being very similar in anatomy to the Pacific group but in much smaller numbers, only about 10,000 animals.

The distribution map below show the three mentioned areas highlighted in blue around the perimeter of the Arctic Ocean. 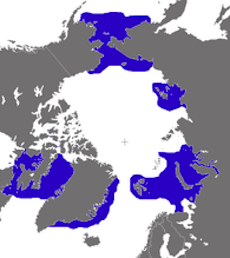 Arctic walrus grow to be large creatures with full grown Pacific males tipping the scales at 3,700lbs. Females can reach a maximum weight of about 2,800lbs.

Atlantic Walrus are smaller with males weighing in at approximately 2000lbs and females around 1,700lbs.

On the Pacific Walrus the tusks can reach a length of almost 40" for the males and yes, the females have tusks as well growing up to 32" in length. Usually the tusk's continue to grow for about 15 years and are a symbol of dominance, leadership and strength in the Walrus colonies.

The Walurs also use their tusk's to haul themselves out of the water unto the ice or rocky shore. Other uses are to break surface ice and to scrape away seafloor sediment exposing food such as clams and worms.

The Ivory tusks are actually the Walrus' upper canine teeth. The tusks erupt when the newborn walrus is about 3 to 4 months old.

Walrus are picky eaters. They prefer molluscs, clams being a favourite. They drag their tusks through the seabed sediment to expose the shells and sometimes will suck in water and eject it with great force making a water jet to push the sediment to one side exposing the food underneath.

They will also eat worms, sea cucumber, crustaceans and occasionally fish such as polar cod.

They fill their stomachs twice daily and an adult can eat up to 6000 clams at a single feeding!

Walrus are very vocal animals, they have vocal cords and make sounds both above and below water. They ofter growl, grunt, bark and click. Under water they make a sound like a bell. A Walrus colony can be very noisy especially if disturbed.

Walrus can live to be as old as 30 years of age, but many die younger than this. Age can be determined by their teeth, just like a tree grows a new ring each year so does the Walrus tooth. A cross section of the tooth will show the animals age.

Walrus calves are born from mid April to mid June after a 15 to 16 month gestation period. Most times the female will have a single calf, but have been know to born twins.

Calves are born on the ice and can weigh up to 165 lbs. New born calves are usually not weaned until they are two years old. The mothers are very protective of the calves during this time, and the calves will often ride on the mothers back in the water.

Female Walrus will also take orphaned calves to care for and protect when the need arises.

Commercial Walrus hunting has been banned in Canada since 1931 and in the USA since 1941. Only hunting by native peoples for subsistence, collecting for research and a restricted number of animals as by-catch in other fishing operations are allowed.

This has allowed the Pacific herd to prosper and the Atlantic herd to rebuild from very low numbers. However, care must be taken with walrus management and conservation methods if the herds are to thrive in the future.

For the native Arctic people walrus meat has been an important source of food for many generations. Along with the tusk's being used for tools and art work, the fat is used as oil for light and warmth

All parts of the animal were used, including the intestines and gut lining to make waterproof material for parkas, and the very tough skin for coverings and rope.

Today Walrus meat is still an important food source for the native people. As well, art work creatively carved from the tusks are a vital part of the Inuit and other native group's cultural tradition's.