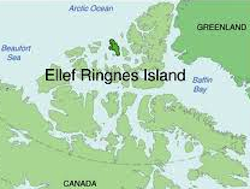 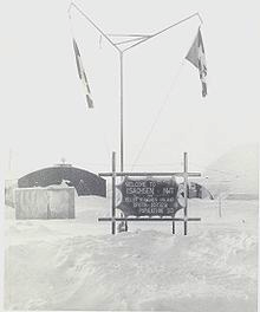 Isachsen weather station began operations on April 3, 1948, it was the third station in a joint initiative by the Canadian-American weather observation program. On October 31st. 1971 the Americans withdrew from the site at Isachsen.

Staff at the station were usually comprised of 8 to 12 men where all supplies were airlifted in from Resolute on Cornwallis Island. The airlifts including barrels of fuel and all consumables. Airlifts usually took place twice a year, once in the spring and once in the fall.

Isachsen Weather Station in Winter, Circa 1957

On October 9, 1949 a United States Air Force C-47 cargo plane crashed on take off, there were 10 people on board, all survived with just 3 of the flight crew having minor cuts and bruises.

Cause of the crash was blamed on overloading and a build up of ice on the aircraft. With average temperatures from -32'C to -51'C during this time of year, ice build up could indeed be a problem.

The Isachsen area experiences about 3 months of complete darkness each year starting in October.

The wreckage of the aircraft remains at Isachsen to this day. More information on the crash can be found on the Old Wings site at this link. 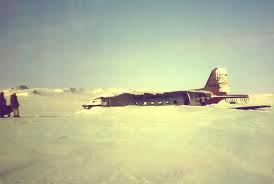 During the summer of 1958 the Isachsen weather station was rebuilt using material, buildings and personnel that had been transported to the site by airlift.

In 1977 the Canadian Government spent significant funds on upgrading the facility but in 1978 due to budget constraints the facility was closed permanently. The last manned weather observations were taken on July 31, 1978.

Historical weather information from the Isachsen station can be found at this Weather Network link.

Do you have a memory from Isachsen to share with others?

Or maybe a visit to the site more recently.

What Other Visitors Have Said

Click below to see contributions from other visitors to this page...